Disclaimer # 1: I am Indian and not only am I a victim of these behaviors but also I did propagate them to some extent.

Disclaimer # 2: I am generalizing based up on my personal experience, not all Indians behave like this. I don’t have statistics – but I do have a test case if you wanna try out – ME.

In all these months we have been here me and Sang have discussed this topic in very much detail. Sang also wanted to blog about it, but I haven’t seen it on her blog and also very recently I encountered this behavior system in much more detail level so I thought I would explain this.

Hesitation: It’s a very common trait among most Indians. They are usually hesitant to do or to say anything. For example imagine a fun activity going on with a bunch of people in there – It would be rare to find a Indian man walk into a strange place with no friends along his side and ask confidently to a stranger coming along “What’s going on here?”. Instead you would come cross, a very slow and sad attempt to know what is going on. By the time he walks in, he already made 50% assumption of what is going on. Well his version of 50%. Then there would be pause and then it would start like “Umm..Aaaaah…What is going on here?”.

It usually starts with hesitation. So we have it depicted here.

I believe it’s because we feel very threatened to any alien situation. I mean anyone can feel like that, but the tendency of an Indian to feel threatened is more. This comes out of the feeling that we might hold that we don’t know about the situation ahead. Ignorance. I also believe that those 100+ years British ruled us, they have colonised our thinking and made us to get scared of any alien/different situation. We need directions(More on this, in a later post)

So, the hesitation usually sprouts from ignorance. So we got it covered here.

Now, if there is any other person, what I mean by that is a middle aged Caucasian man – it would be easy for him to admit the ignorance and move on to knowledge and participation. But not for an Indian. I believe that this Ignorance comes out of something called – Confusion. We really don’t know what to believe. Should we go with our tradition, should we go with Western one? Should we mix it up? People make fun of American born Indians by calling them – ABCD: American Born Confused Desi. But in reality, we, who are born here, are as much confused as the American born. We have Levi’s, Snickers, Cereal, Oatmeal too. Big deal. It’s as much culturally shocking here as it is in America. What more? We didn’t want to offend any God, so we have God in many forms and shapes – adding more to the confusion of an Indian born confused. So, anyhow before I digress I want to capture this.

The Ignorance sprouts out of Confusion. So we have it down here.

But do you think that out of all this hesitation, Ignorance, Confusion we are ready to admit it and act on it? He he. No way. I have already blogged about how the toughest thing for an Indian is to admit that he/she is wrong. So, we defend our Ignorance – call it Modern Spirituality. We defend our Confusion – call it unity in diversity. We defend our hesitation – call it humbleness. And why? All because we have egos bigger than our real selves. We walk around with Egos larger than life.

So, let’s capture it too. Ego stops us from seeing the faults with in us. 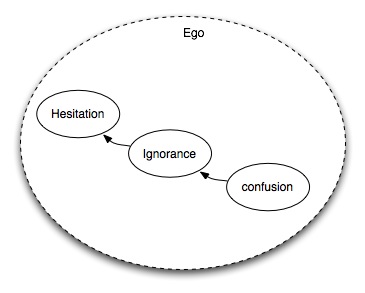 Repetition: Imagine you are an alien. Just landed on Earth. If I take you to a remotest place in India and leave it there for you to figure it out. After 5 days you would start to think that Indians must be born deaf. Or you must come to believe that we are wicked dumb. Bear with me. This is a very hard trait to observe, especially when you are doing it. Indians have a habit of repeating what they say. For example, if they are asking someone to “Turn Left”, this is how it would go.

Each Turn Left command getting closer and closer to the earlier one. Believe me this happens for real – in all frigging situations. In fact we are so used to it that it’s very hard to detect it. Next time when you are talking to an Indian try observing this.

I have a theory as to why we repeat stuff. I think partly it’s the confusion in us which just wants to confirm one thing to someone many times. It’s based on fear. We usually go through a lot in 1 day here. So our natural thinking is based on fear and we act it out. Also dousing this with “Hesitation” we get more agitated and repeat stuff. For example: In our earlier case where a Indian guy walks in to a strange situation and he is hesitating to ask what’s going on, and if it were to be an Indian there – he would just go:

People use “Repetition” as a tactic to counter “Hesitation”. So, let’s get that in there. 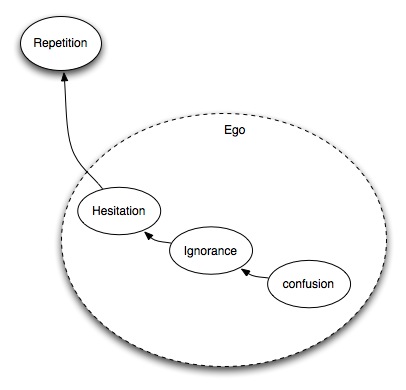 Irritation: This is usually the outcome of the first two traits. I don’t know why but most of the time Indians are Irritated. Or at least in places like, train reservations, banks, post offices, traffic, buses, taxis etc. I believe that the Irritation comes from by looking down on people who are ignorant. When I go into a bank it’s assumed that I am supposed to know everything in there. People who work there get irritated with a slight question. Add to this, the hesitation on my behalf to ask the question and coupled it with the repetition from the guy – gets born Irritation. People are irritated with small things and for no good reason. So, let’s capture this.

I also have one last idea about this triumvirate. It comes from the 3 most popular Gods of India

Repetition == Lord Brahma – who is the creator of this world

Hesitation == Lord Vishnu who is the maintainer of this world

Irritation == Lord Shiva, who gets pissed of this hesitation and repetition and opens up his 3rd eye to destroy this world! 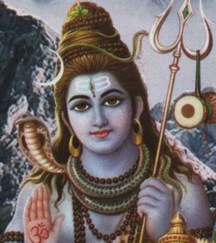 2 thoughts on “Hesitation, Repetition and Irritation”