I started working on computers in the year 1992. It’s been almost 17 years I have been working on software. As I left school to get a serious career in Software programming, I saw a clear cut pattern about people and software.

You see in this world there are 2 kinds of people – 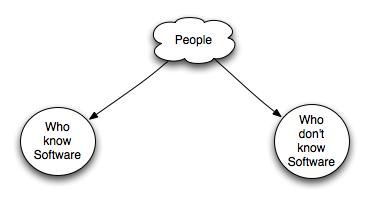 But, I have realized that there is a third kind and the most dangerous one.

3. People WHO THINK they know Software

And believe me there are a lot of people who are out there who fall into 3rd category. With technology advancing so fast, people who wield a iPhone or a Blackberry think they know enough about software. It’s because the software “using” has become so dumb and easy.

For example, take ‘iTunes’ – it’s the best interface ever to interact with music files. Period. It also comes with a Apple store plus a kitchen sink! People love it. People like one windowed interface to all their music. If you read that carefully – I said, ‘using’ software has become so easy. But the problem is ‘building’ software hasn’t improved as much as the ‘using’ part.

Now, coming to the point. Imagine if you belong to Group 1 (People who know Software) – you work hard to build software and you know it and you are confident about yourself. Then as your career progresses you become a ‘Technical Manager’. You talk to developers and you give out ideas, you schedule project plans, communications. You know which tools to use and you have got it under control. Awesome. Congratulations and my kudos to you.

Imagine if you belong to Group 2 (People who don’t know anything about Software) – you work hard, you buy a Mac, you have friends who work in software but you never talk to them about their tools. You talk about the outcome of the software process, a product or a service. You use, of course, iTunes. You buy legitimate software and you are happy with your Apple updates. No problem. In the alternate universe – you buy PC, go for Vista and cussing Microsoft & HP printers but you still end up loving how easy iTunes works and how fast Safari 4 is.

Now, Imagine if you belong to Group 3 (People WHO THINK they know Software) – You work hard, but you don’t know that you don’t know. You have software friends, but you yap away some jargon. You use iTunes and think every software in this world SHOULD look like iTunes (Kamal, I can hear you giggle). You think software is cheap and easy and so are people who work on it. You zoom through your life without any clue about software but still maintain your egoistic authority on it.

The major pain in the butt situation is when these Group 3 people become Managers – by some chance or luck or sheer Oldage or money (mergers). These people think they know how software works and how their developers think. They have no idea about software project management and no clue about versions, timed release of software and best practices of software. What happens is the slow decay or rotting of the company. I have been in so many situations in my career all-together that I saw so many of these so called “Non-Technical” managers killing off the product, service and eventually the company. But, the real problem is they don’t know that they are the problem. They move onto new companies, new acquisitions and killing many other future companies.

How do you identify these people?

Look out for these warning signs.

Let me know if you come across anything I miss. I am sure there are many more.

How do you fix this?

This is tough, but with some patience and some systems these could be fixed.  Here they are:

If these 2 fail, you become an expert in one of the software niche and become a freelancer that way you never have to work under a ‘Non-Technical’ Manager. You finish a project and you move on. You never have to educate anyone and you will be happy with your work. You would giggle inside when the ‘Non-Technical’ manager references iTunes in a meeting, but at least you don’t have to see him after the project is done.

One thought on “Non-Technical Managers”