There are two video sites, I usually hangout on. One is for fun, another one is for inspiration. I am always looking for ideas, inspiration in my environment. So, for fun nothing beats Apple trailers. Other than reading and trying to keep up with the latest movie releases from slashfilm, Apple movie trailers provide me enough fun in my leisure time. Another good source of videos which actually inspire me is at TED. This has an amazing collection of talks which could only be described as the cream of cream. The Rolls Royce of conferences.

So, the other day me and my wife were talking about Antony Robbins and I remembered that he gave a talk at TED. So, we decided to watch it. Now a thing about Tony Robbins. I first heard of him in 1999. I have never read any of his books but had him on the back burner that one day I will pick up one of his books. If you are a movie buff, you would recall that he did make an appearance in ‘Shallow Hall‘.  Anyhow, Tony Robbins has this amazing energy in his talk. You listen to him and boom your energy level goes up. So, we were watching this video on TED and he talks about two predominant emotions that we need to take care of. Those are: 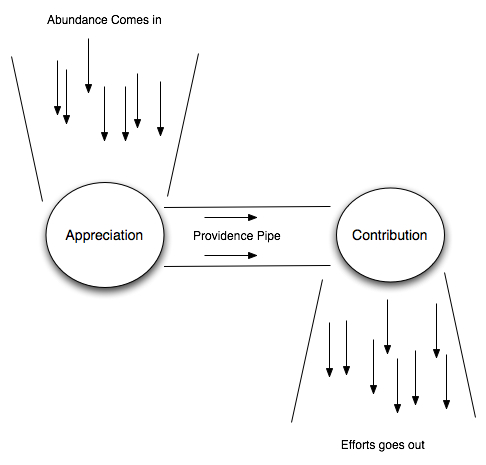 What he said, kinda stuck with me for a while. I kept thinking about it and then I realized how these two are connected. It’s a very well known fact among people who live their lives with ‘awareness’ that ‘being grateful’, ‘appreciating’ what we have, actually manifolds what we have. It’s very true. You should try it out some time. Think about something which you have in your life. It could be anything, even including something you don’t like. Find something good about it. Close your eyes and from the bottom of your heart thank the higher force for it. See how it changes. If it’s a problem you thought of, then the problem gets solved. If it’s a possesion you thought about then what you have will increase magically.

But that’s only the first part of the lesson. The most important aspect which most people miss is – contribution. We become grateful for what we have, but we stop at that. We stagnate. That kinda rots the system. So, to solve this we need to start contributing. So, what ever you are thankful for, try thinking of a way of contributing it in someway. The ideal example is ‘Money’. If you are thankful for the money you have, you can make it increase more and more by being thankful for it and also by giving it or passing it on. You see, like the picture above describes – you want to become the ‘Providence Pipe’ rather than a stinking stagnating hole. If you contribute to society, people, friends, relatives often – more and more stuff flows to you.

The whole idea is to become the owner of the pipe, not the owner of the content of the pipe which is ephemeral. As I kept thinking about it – I realized that it was so true. It reminded me of a quote which my dad is to use, “To teach is to learn twice”. Only by passing it on, by teaching (knowledge, wisdom, information) we learn more and more. Irrespective of what it is – knowledge, power, money etc – contribution creates a healthy society as well as healthy individual who is contributing.