The last time I saw Swami was last year in November. Whenever I visit India, I try to go to Tirupati and Puttaparthi. The year before I could only go to Tirupati. Last year it was even shorter visit. 20 days. It would be hard to go to both the places but I wanted to try. Our whole family drove to Puttaparthi and the plan was to see Swami the next day and they would come home back and I would go to Tirupati.

The next day when we went for Darshan, Swami didn’t come out. He was already on wheel chair and because of his sickness there was no darshan. We enjoyed the sumptuous North Indian vegetarian food and got back to darshan again at 3pm. This time I was sure I would have a darshan, because I was leaving that night and if I don’t see him I didn’t know when I will see him. Me, my brother-in-law and 3 year old nephew waited for Swami. Bannu was getting restless. Poor kid, how long can he just sit and wait. 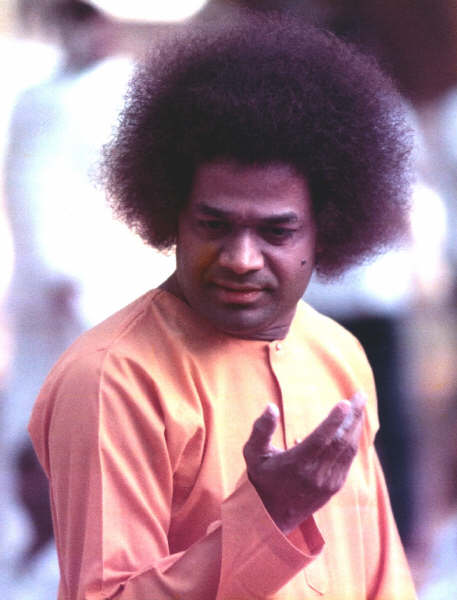 I think we waited for 3 hours before Swami showed up. I was so relieved. It was the best darshan ever. Swami stayed out for everyone and then there were beautiful bhajans. Swami says that we need to come visit him to re-charge our spiritual batteries. Thats exactly what happens to me when I go see him. It was just beautiful. To see him sit there so close. I was drinking it in. As I was having the darshan, a internal dialogue started. I was telling him that how we are expecting a baby. I prayed for a healthy baby. I also mentioned that I won’t be coming back to see him for another 3 years this time. Next time I come around I will bring my daughter. Most of all, just being thankful for all the wonderful gifts he showered on me.

As the bhajans came to an end, students brought laddus as prasadam to Swami for his blessing. Swami touched the prasadam and they would start coming towards us to distribute them. I was so excited because I never got any prasadam so far in all my visits to Swami. I took mine and thanked Him.

As we got out and we heard the news that the hurricane is about to cross over to land in Chennai. It would have been impossible for me to take public transport and go to Tirupati as it was affected most. So we decided to head home and I was just happy that I had such a wonderful darshan.

I preserved the prasadam and brought it over to US for Sangita to have it – as a blessing for my baby.

Now I realize the importance of why it was the best darshan ever. Swami is no more now and the most wonderful memory of Puttaparthi for me is that evening. Thanks Swami for such a wonderful darshan. I miss you a lot. As I think of you Swami – there is only one bhajan that rings in my head.